Episodes from the 24 Hours of Le Mans

The film “Le Mans” and Mazda 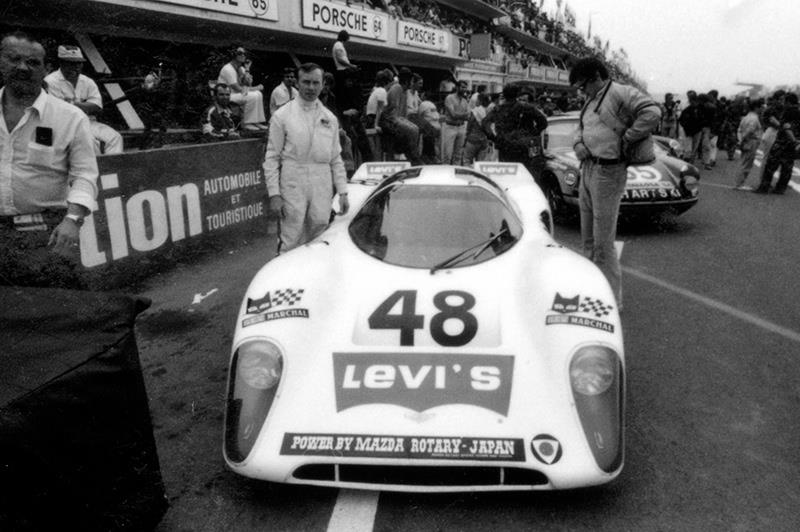 Have you ever heard of the hit movie “Le Mans” starring Steve McQueen? It was an American movie full of spectacle and car action. The film was set at the 1970 24 Hours of Le Mans, where the pit for McQueen's Gulf Porsche was next to the pit for the Mazda RE-powered Chevron B16 Mazda. The Mazda team was preparing to compete in the 24 Hours of Spa in July of that year, and there was talk of negotiating with McQueen for a ride in the Mazda R100 Coupe at Spa. Of course, they couldn't even get in touch with the big star, and the deal fell through. 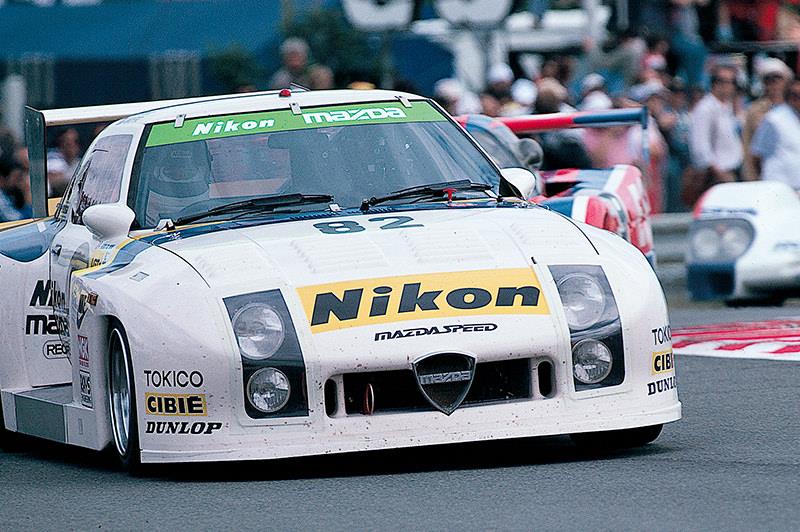 A modified version of the original RX-7, the 1982 RX-7 254 developed upon the RX-7 252i entered at Le Mans three years earlier. The way the car twisted and turned was different from modern GT cars, but it proved to be a “handling machine” that was easy to manoeuvrer. Mazda's engineers were dispatched to the IMSA series in the US in 1979 to study the RX-7's use in various parts of the country, and came up with a number of improvements to the chassis stiffness of the RX-7 race car. These improvements were incorporated into the RX-7 254, which driver, Yojiro Terada described as “a comfortable car to handle”.

The drag coefficient of the Mazda 717C approaches 0.277 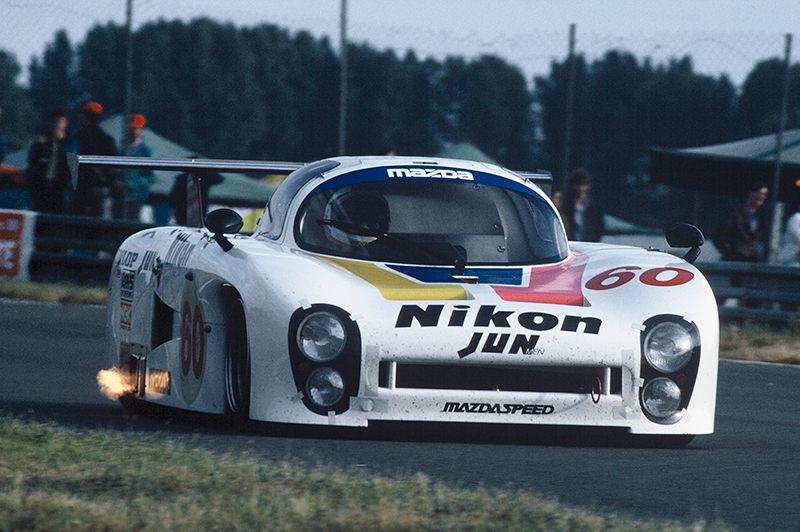 In the 1980s, it was fashionable in the automotive industry to use the term “CD” (which represented “drag coefficient”) to describe the aerodynamic drag of a vehicle. This was probably because it gave the impression that the car would cut through the air. In reality, it was a matter of balancing the CD value with the lift (CL) value, but the Mazda team, which was the least powerful of the Le Mans contenders, developed the Mazda 717C, a car with an extremely low CD value, in order to at least make up time on the circuit’s unique straights. This car was dubbed “Soramame” (“broad bean”) due to its smooth nose and round body and had a CD value of 0.277. However, in the end, the car was not popular with drivers because of its unstable behaviour in corners and over uneven surfaces.

Why the Mazda 737C's body is pure white The No. 85 Mazda 737C, which raced at Le Mans in 1985, was the mature and completed version of Mazda's first Group C junior car, the Mazda 717C. The expectations were high, and despite knowing that the schedule and manpower were tight, three cars were built and each tested and polished up on the circuit. The roof of car 85 was painted red and silver by the first week of June, just before Le Mans, when a fuel leak occurred at a circuit test in England and the car caught fire. The burned-out car was repaired in just three days, but there wasn’t enough time to redo the paintwork. The success of the Mazda 757 in 1987, having finished 7th overall, was quite a hit in Japan, thanks to live TV broadcasts. It was covered extensively in newspapers and magazines, and the driver and team principal were invited to appear on late night TV broadcasts, which attracted a lot of attention. This goes to show that the difficulty of winning overall victory at the glorious Le Mans race was becoming more and more apparent to the Japanese public. Mazda was so pleased with the response that it put up a huge banner on the outside wall of a large department stores in Ginza, Tokyo, which read “The Mazda 757, the first Japanese car to finish 7th in Le Mans”. The banner was gazed up at by office workers on the street and shoppers enjoying the Sunday pedestrian mall. In 1982, when the Mazda 717C was being developed, the second-generation Savannah RX-7 was due to be launched in 1985, just three years later. The development code for this car was P747 and for this reason, the first Group C junior car traced back from this and was named the 717. As a result, the next three-rotor GTP machine was named 757 instead of 747. As the model evolution progressed, the next car in the 767 range was to be the 777, but it became the 767B, meaning that it was a matured version of the 767. The next model was named the 787 because it was to be a two-step development upon the 767B. Or perhaps it was because 777 (“nana nana nana” in Japanese) was hard to pronounce? In order to compete in the 1991 24 Hours of Le Mans, Mazda was required to enter all eight rounds of the World Sportscar Championship (SWC), the FIA World Championship at the time. Mazda entered only one car in the SWC, the previous year's Mazda 787, and the schedule was as follows: Suzuka, Monza, Silverstone, Le Mans, Nurburgring, Magny-Cours, Mexico, before returning to Japan for the final round at Autopolis. The series entry number for the SWC was 18, and the two additional entries for Le Mans were designated by the organiser, the ACO, as numbers 55 and 56. On another note, the numbers 18 and 58 were used for the SWC domestic races at Suzuka and Autopolis, and 201 and 202 were used for the national championship (JSPC), while 55 was the car number used only for Le Mans.

The "Never Stop Challenging" monument at the Miyoshi Proving Grounds

After winning the 24-hours of Le Mans in 1991, Mazda's then chairman Kenichi Yamamoto, the father of the rotary engine, wanted to preserve this achievement as one of Mazda's assets to be passed down to future generations. As a result, a monument was erected on the test course at the Miyoshi Proving Ground in Hiroshima Prefecture, one of Mazda's development bases. The monument, unveiled in February 1992, is inscribed with the words "Aki naki chosen" (“never stop challenging”), penned by chairman Yamamoto, and the date "June 23, 1991" marks the day that the Mazda 787B crossed the finish line in overall first place at Le Mans. 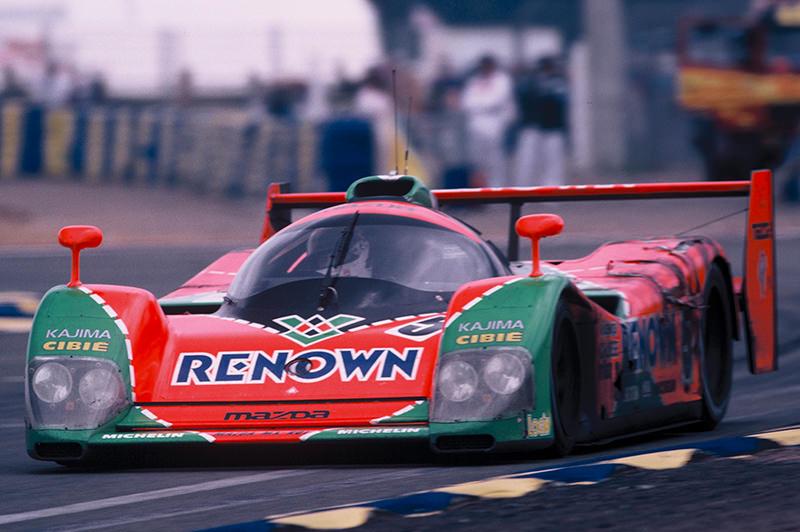 In 1992, the rules for the SWC series, including Le Mans, were changed to allow only cars with 3.5L NA engines to participate in the series. The Mazda MX-R01 was a new machine for the series. At Le Mans in the same year, car number 5, driven by three of the previous year's winning driver crew, ran well and was in the lead from the start of the race, but suffered electrical problems and fell back. The result was a 4th place finish, just one step short of the podium. The new regulations meant that the car had to be shaped for aerodynamics, with minimal space in the cockpit, making it difficult for the tall Brian Gachot to drive for long periods of time, so he was replaced by the smaller Maurizio Sandro Sala, driver number 6, for the remainder of the race. On the occasion of the 20th anniversary of its Le Mans victory, the 787B-002 No. 55 was given the opportunity to run on the Circuit de la Sarthe once again after undergoing a thorough overhaul. The car was fully restored over a period of about six months by the mechanics and members of the team who were in charge of its development in 1991, and the car is now fully back on the road. Just before the 24 Hours of Le Mans in June 2011, the car was driven by Johnny Herbert, one of the winning drivers, at full throttle on the full course. It was greeted with applause and cheers from the crowd. It was also a nice touch from the ACO that Herbert, who was unable to get on the podium immediately after the finish in 1991 due to dehydration, was able to stand on the podium on this day 20 years later. The winning car, the 787B-002, was permanently preserved after Le Mans, and the remaining car, the 787B-003, which was built at short notice for the JSPC, has been restored and is also being preserved. 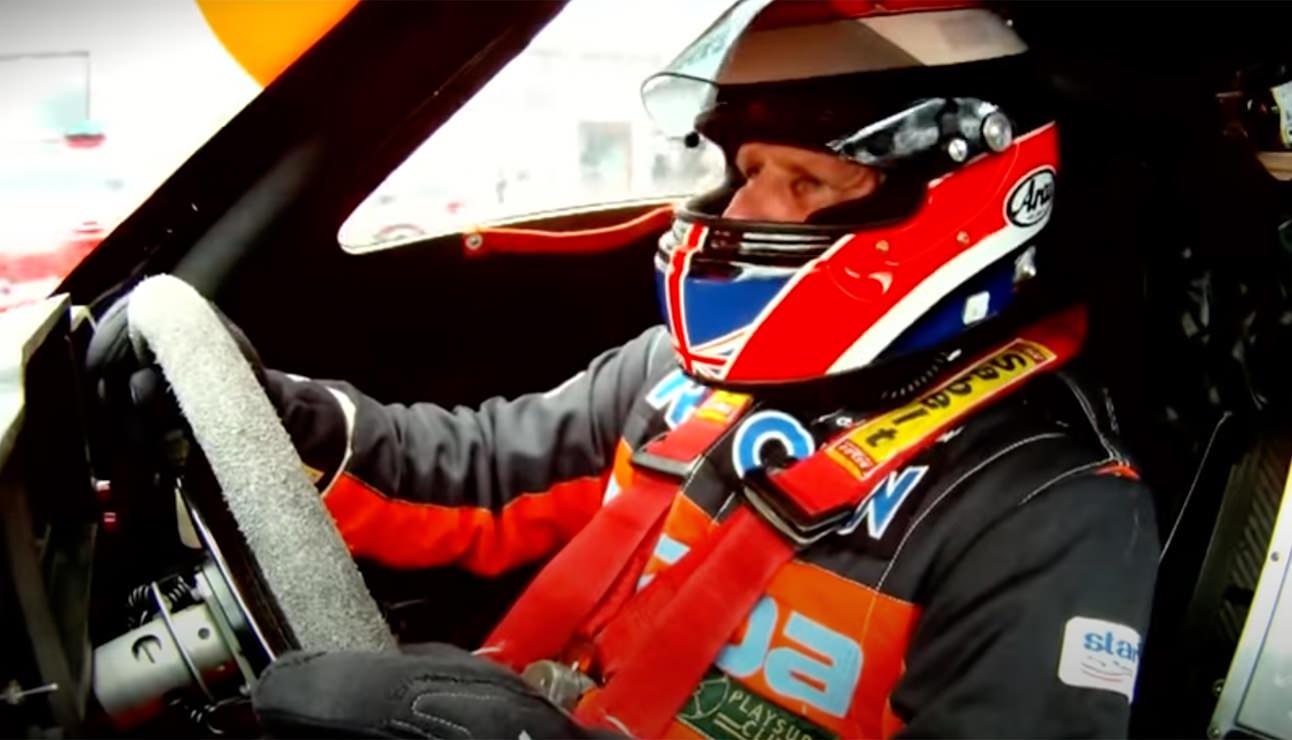 ONBOARD LAP WITH JOHNNY HERBERT 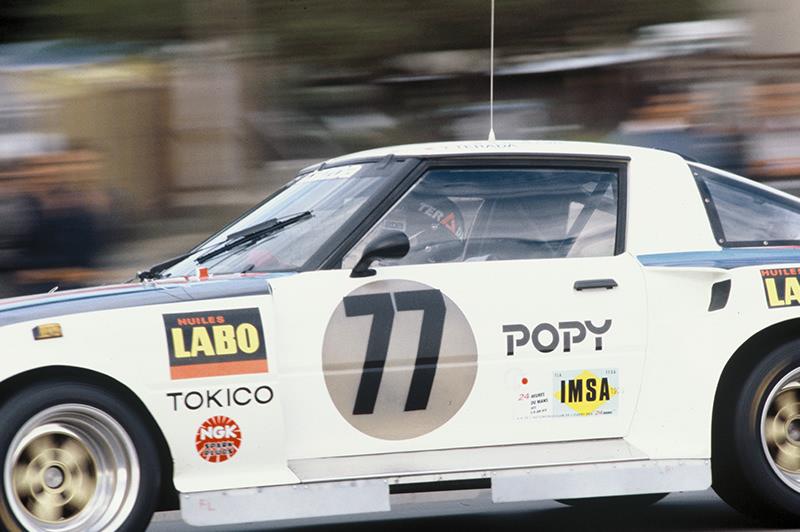 The 252i utilized French-made Gotti wheels. This was the result of an attempt to improve local exchange and service by using French products including Cibie headlights. However, there were many problems with the Gotti wheels, and from 1981 they were switched to RAYS for the 253. On the other hand, Cibie was a major brand in Japan and had a solid support system, so it continued to be used until 1992. The No. 86 car was sponsored by Nikon and thus silver, yellow, and white were the main colors used for the car and team uniforms at Le Mans that year. This color combination was used as Mazdaspeed's image color for a while, and the same color scheme was used for the transporters and service cars. 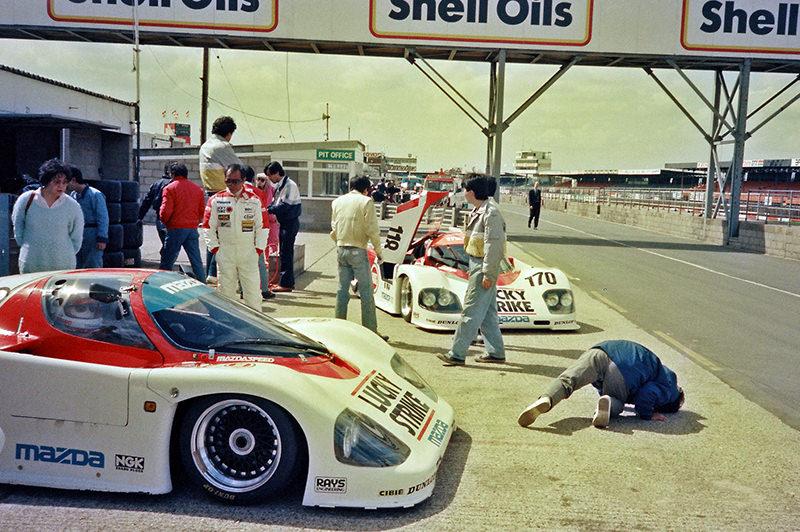 This year, Lucky Strike became the main sponsor, and both cars were given the exact same livery. In addition, the silhouette of the 757 was more difficult to distinguish from other C cars than the previous C2 cars. For this reason, the team timekeepers were able to distinguish the 757 from the other cars through its unique rotary exhaust sound and by the color of the “headband” windshield decals. At a time when automatic timing systems had not yet been introduced, teams competed through trial and error to determine the accuracy of their own and their rivals' times. 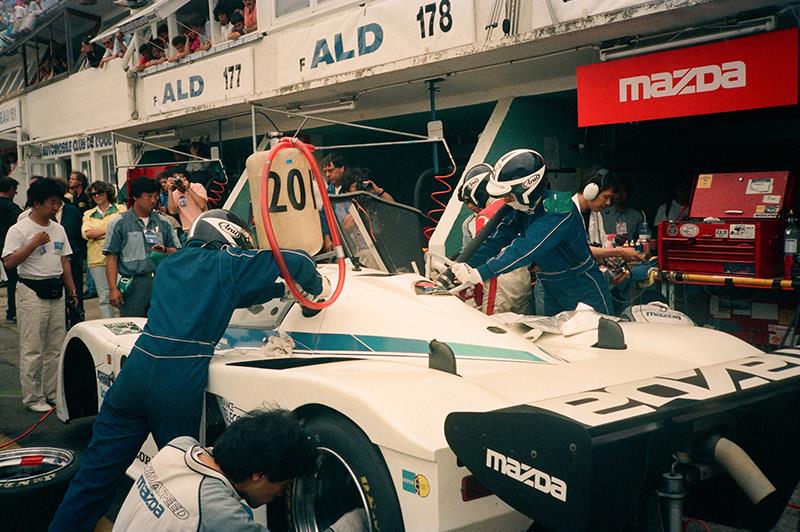 At the 1988 Le Mans race, the team was instructed by the officials just before the race that refuelers must wear jet-type helmets during the race. However, the team did not have any jet-type helmets without chin pieces, so on short notice they decided to use driver, Yoshimi Katayama's spares, and together with Katayama, the three pit crew wore the same helmets at the same time as the driver, a rare sight. 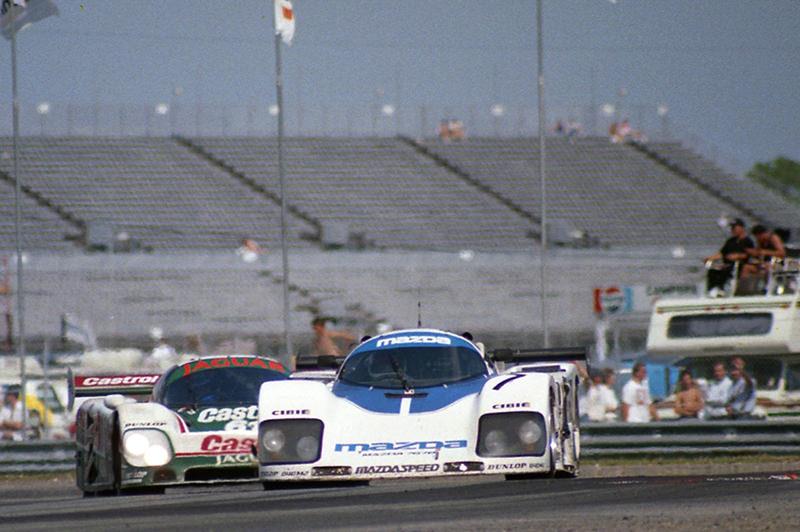 In 1989, Mazda competed in the 24 Hours of Daytona with the new 767B and finished 5th overall. Although the race was interrupted for more than four hours due to fog, Mazda were able to test the side exhaust system, the four rotors and so on before Le Mans, and began developing the linear variable air intake system at the Fuji and Suzuka tests. Starting from the 1991 Le Mans, Group C cars were divided into only Category 1, for NA 3.5 liter engines, and Category 2, for all other engines. Thus, the 1990 787 and 767B were the last IMSA GTP-spec entry. 1990 was also the last year for the three-digit number used since 1986 to indicate that the car competed in the IMSA GTP class at Le Mans.