Participation in and Sponsorship of Local Events

Each year, the Head Office of Mazda (Hiroshima) participates in one of the largest festivals in Hiroshima Prefecture, the "Hiroshima Flower Festival," which has been held annually during a long holiday week in May, since its inception in 1977. The Mazda Plaza holds events enjoyed by both children and parents alike, and also displays Mazda vehicles.
In FY2018, many events were held on the stage in the Mazda Zoom-Zoom Plaza, including donations of welfare instruments, a charity bingo tournament to raise funds for Mazda's social contribution activities, songs and dances by local residents, and a talk show given by Hiroshima Toyo Carp and Sanfrecce Hiroshima players. A handcraft corner for making original calendars with photos was set up, where children painted visors as they like to create their own one-of-kind visor.

During the Flower Parade, a convoy of Roadsters, comprised mainly of Roadster Fan Club members, participated in the Flower Parade, further brightening the event.
Other members of the Mazda Group, including our nation-wide dealerships, will continue to strive to interact with local residents and revitalize the community through active participation and cooperation in prominent events and festivals in the local community.

Duration of participation in the Hiroshima Flower Festival: 42 years The Hofu Plant has been participating every year in the "Love Hofu Flea Market," which is held by companies, the Chamber of Commerce and Industry, the local government, and shopping centers as the leading event of the "Love Hofu Campaign," since the first time it was held in 1993. As the secretariat of the Love Hofu Campaign Promotion Companies, the Hofu Plant participates in planning and running the flea market, and presents the Mazda booth jointly with partner companies.
In FY2018, around 250 employees and management members from the Hofu Plant worked as volunteer staff. Staff sold goods and ran game and Mazda car display corners enjoyed by everyone from children to adults, and also supported a stamp collecting game operated by the organizers. Some of the money from sales was donated to welfare organizations in Hofu City or used as funds for operating the flea market. Jointly with Mazda Group companies in Miyoshi City, the Miyoshi Plant participates in events, helping revitalize communities while deepening exchange with local residents. Moreover, as a corporate member of the Miyoshi City Tourist Association and the Miyoshi Chamber of Commerce and Industry, the Miyoshi Plant provides support for organizing events.
The Miyoshi Plant has participated in the Miyoshi Commerce and Industry Festival every year since its inception in 1993. The plant had a booth at the Festival in FY2018 as well.
Also, a bus tour to the Mazda Miyoshi Test Course was held as one of attractions (with more than 500 visitors). During the tour of the high-speed circuit, the bus was stopped to allow visitors to climb the 45-degree angle bank on foot. Participants told it was amazing, and that 45 degrees felt like a vertical wall.

Participants had the following to say: "Even though we live nearby, we normally can't enter the test course, so it felt like we were visiting a secret place - it was fun!" 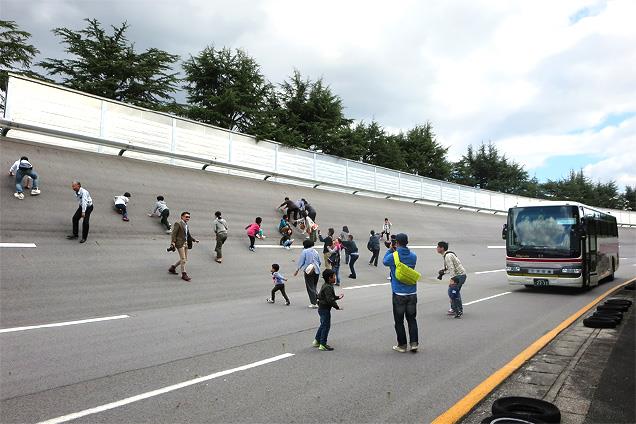 By the numbers
Duration of program: 26 years

Yoshiwa Kogyo Co., Ltd., which manufactures and sells automotive parts, concluded in June 2007 an agreement called "Community and Business Partnership (One Village, One Company: Shimane)" with Yoshika-cho in Shimane Prefecture, where its plant is located. Through this partnership, the company supports community revitalization and actively participates in community activities.
Yoshiwa Kogyo continued supporting the Yoshika-Yume-Hana Marathon event annually hosted by the Yoshika School Board in FY2018 as well. By the numbers
Duration of program: 13 years

Exchange with Local Community through Monotsukuri

MMVO participated in the Salamanca Spring Festival and Irapuato Strawberry Fair; its booths introduced Mazda's monotsukuri philosophy and car production process.
About 27,000 people, especially elementary school students, visited MMVO's booths at the events, which were held during March and April. In addition to viewing the exhibition, employees helped visitors experience some of the work that happens at the plant and enjoy monotsukuri using a model car.