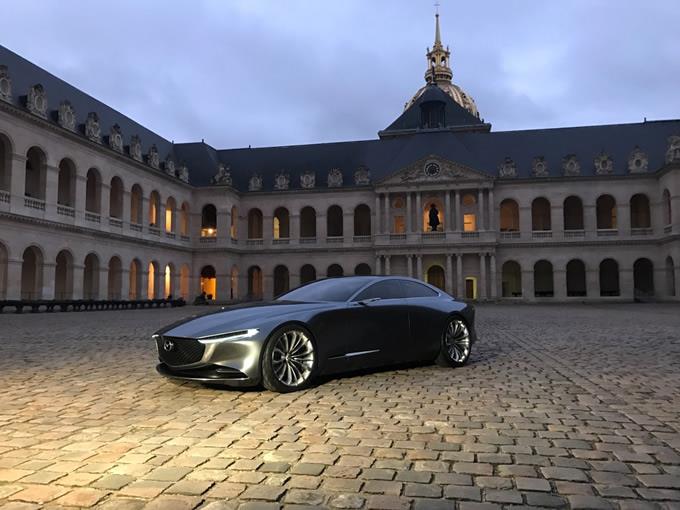 On January 30 (local time) the Mazda VISION COUPE was named “Most Beautiful Concept Car of the Year” at the 33rd Festival Automobile International held in Paris, France. We have just received some additional photos taken over there, which we will also show you!

First, let’s take a look at the venue. The Hôtel des Invalides, located in the center of Paris, also commonly known as Les Invalides, is a complex of historical buildings completed at the beginning of the 18th century. The place is also famous for being the tomb of Napoleon Bonaparte.

In addition, some of the buildings house the military museum of the French army.

(Photo left: The entrance to “Musée de l'Armée,” right: There are cannons on display in the background)

The award ceremony was held in a special venue built on the grounds of the historic Les Invalides. The ceiling was made of glass so that guests could see the buildings of Les Invalides.

The “Most Beautiful Concept Car of the Year” award is presented to the concept car that best embodies beauty, creativity in design and the latest trends, as chosen by a jury consisting of eminent architects and fashion designers amongst others. Mazda received the same award in 2016 for the Mazda RX-VISION, meaning that both of the design vision models that will guide the design of the next generation of Mazda cars have won the award.

(Photo right: Receiving the award in 2016 for RX-VISION)

On receiving the award, Ikuo Maeda, Mazda’s Managing Executive Officer in charge of Design and Brand Style, said “With the VISION COUPE we were trying to use reflections to express a sense of vitality. That’s the next step for KODO design. It is a great honor for me to have this car that reflects the delicate Japanese aesthetic be recognized here in Paris, the City of Art, following on from the RX-VISION. In future, we want to retain our identity as a Japanese automaker as we continue making beautiful cars with a global appeal. The VISION COUPE, first revealed to the world in 2017, is a design vision model for the next generation of Mazda cars. Featuring a simple and flowing “one motion” form, it embodies a more mature interpretation of the KODO-Soul of Motion design language tempered with a Japanese aesthetic. Taking cues from the Mazda Luce Rotary coupe and other models that comprise Mazda's design heritage, the styling is elegant and projects a premium feel.

Incidentally, this is the first time that the VISION COUPE has been displayed outdoors. The design that focuses on reflections of light shows a range of different facets, depending on the place and time of day. Be sure to keep this mind and compare the outdoor and indoor photos from this event and from last year’s Tokyo Motor Show.

So what did you think of the combination of beautiful buildings and our car? We hope you were able to enjoy the atmosphere of the venue together with a feeling of some Paris sightseeing. You can look forward to seeing cars that share elements of the VISION COUPE’s design on the market some time in the not-too-distant future.

■ There are more photos and videos on the Mazda France Facebook page! Be sure to have a look.
⇒ https://www.facebook.com/MazdaFrance

■ Go here for the video “The Philosophy Behind VISION COUPE”
⇒ http://www2.mazda.com/en/next-generation/design/