Freedom of design made possible by ingenuity at the production site

The People Behind the MX-5:Takaki Nakamura, Final assembly engineer

A car designed and produced with ingenuity

What does the “development” of a new car refer to? Conceiving of and designing a highly efficient engine that runs smoothly, and a transmission with a crisp feel? Creating a beautiful and functional design? These are the elements that many members of the news media focus on when a new car is launched. But is that all there is to it?

Takaki Nakamura is an engineer who develops new cars at Mazda, but his job does not entail coming up with parts for the suspension or creating a beautiful form. He works in production. His job is to understand the spirit behind a highly inventive design, to be thoroughly familiar with the possibilities of the factory’s production equipment, and to serve as a bridge between the two to bring the design to life.

So, of course, he was often seen bustling about the R&D departments during development of the MX-5 RF.

Creating new possibilities in production through thorough knowledge of development

“I’ve loved cars since my student days,” Nakamura said. “I loved driving too, but I had more fun dismantling cars and tinkering with them. When I came to work for Mazda I wanted to get my hands dirty, not be tied to a desk.”

But he soon realized he’d need to spend time at a desk too. His career path led him to become an expert in the technology required to assemble a car exactly the way it was designed. And, in his effort to master those skills, he set a goal of first becoming an engineer who could truly understand the monotsukuri spirit. He decided to sign up for a special educational program the company started in 2008. There he spent time learning about the development that takes place at the design stage.

“It was a good experience that allowed me to work out how I felt about my job. I decided that production should be actively involved in development. “

“There are inherent limitations in production related to equipment and processes. On the other hand, if design proceeds with an awareness of these limitations, new monotsukuri possibilities can open up.

“Production takes place amid a lot of machinery but involves craftsmanship. When you find something in the drawings for a new car that won’t work with the equipment you have, the car can’t be produced. So you have to ask for the specs to be changed. This has happened quite a bit.

But, by understanding the intent behind the design, you can appreciate the importance of the functions needed for the car included in the drawings and the value the designer wants to offer the customer. You don’t just do what you can. You have to consider what can be done from the production standpoint and how problems can be solved. I came to feel that was my job.”

When the concept for the car was decided on, it was clear that production of the MX-5 RF would be more difficult than anything that had come before.

“In the early stages of development when the design for the vehicle was revealed, so many problems arose that I wondered whether we’d even be able to make the car. So I went to see the designers and the engineers who designed the mechanisms and offered some suggestions.

For example, in the soft-top model the back end of the glass in the doors is round, but in the RF it is angular. I said that in terms of efficient production it would be better to use the same design as the soft-top. But the designers wouldn’t compromise on that point. They said they’d come up with that shape after a lot of thought. They insisted it was not only a key to the beauty of the design but also a way to ensure a good field of vision for the driver. It comes down to a choice between difficulties associated with production and the originality devised for the benefit of the customer. I understood the situation, so of course I gave the go-ahead, because coming up with a strategy for that purpose is our job.”

The biggest obstacle in producing the MX-5 RF was combining the beautiful design with the complex mechanism for opening and closing the retractable roof. 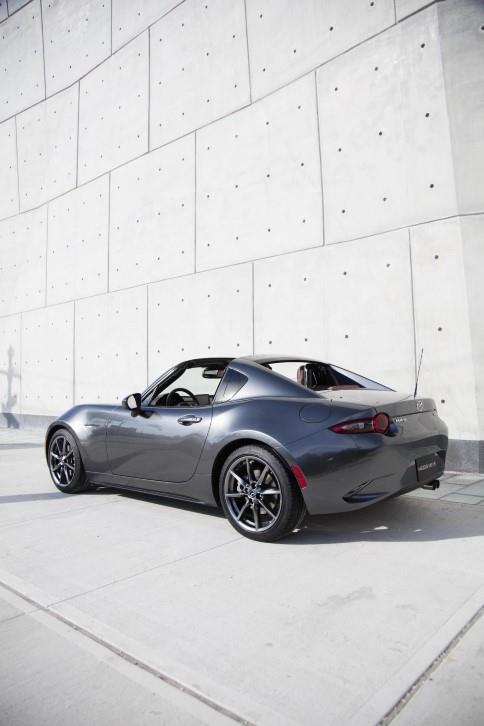 "A lot of thought went into both the design and functionality of the retractable hardtop. When I saw the design drawing, the first thing I thought was ‘This is unusual.’ Adjoining parts are packed into a small space whether the hardtop is open or closed, and if they get even the slightest bit out of alignment, the top may not open and close properly."

"In terms of product quality, at Mazda we believe that trouble-free operation and preventing noise and vibration are a matter of course when manufacturing cars. When we focus on a specific area to express a vehicle’s uniqueness, we refer to that as ‘appeal quality.’ With the retractrable hardtop on the MX-5 RF, a very high level of technical capability was needed just to achieve ‘matter-of-course quality.’ And we had a strong sense that this in itself would lead to ‘appeal quality."

"If we had the luxury of lots of time and plenty of craftsmen to produce each car, the obstacles wouldn’t be so great. But with Mazda’s flexible production various models come down the same line; from MX-5s to Mazda2s. And we have to produce tens of thousands of high-quality MX-5 RF cars without holding up the line."

“I have to rack my brains to figure out what to do. Knowledge and hard work will open up a path. That’s the only way I can move forward. I don’t want to go to the engineers and designers and try to argue them down. They were driven by a passion and it was infectious. I decided to take up the challenge, so I had to follow through.”

It’s fun to see the big rear roof on the MX-5 RF lift up, see the roof retract into the body and then see it go back to its original position. The beautiful parting line that is created lines up perfectly, making the roof appear part of the body.

You can watch the roof-opening sequence in this CGI video. 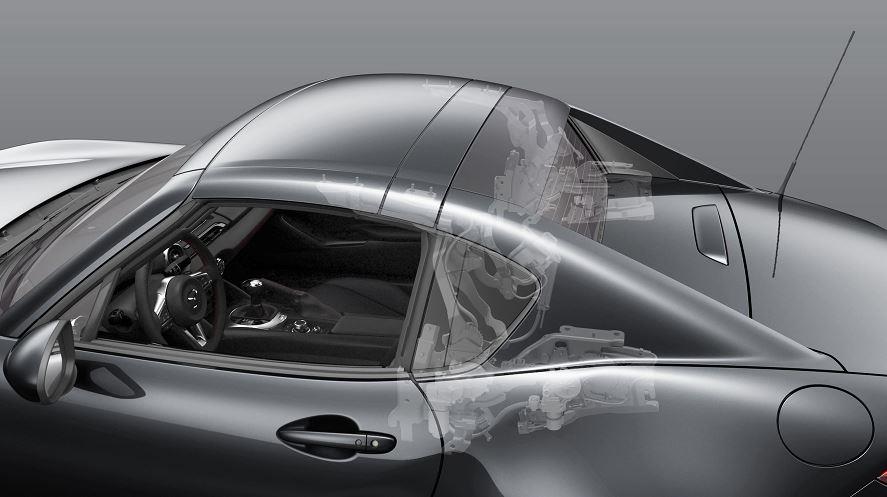 It’s not just the fun of seeing this change happen. This movement also demonstrates the excellence of Japan’s manufacturing. It’s achieved with interlocking wedges on each of the four corners so that the rear roof fits the body beautifully. This idea, which was developed through cooperation between design and production, perfected the MX-5 RF. And if you look more closely you’ll see that kind of knowledge and ingenuity in every inch of the car. 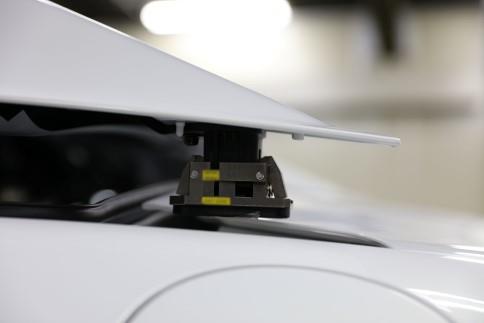 What keeps this enthusiastic 27-year-old going?

This interview with Nakamura took place not long before the start of full-scale production, and he dashed in barely in time, beads of sweat on his brow. He’d been in the plant working out production methods since morning, he said.

"Amid all this hecticness, I realized something interesting: Although I’m a Mazda employee, I’ve lost the sense that I’m working for Mazda’s benefit. Sometimes I fire myself and my coworkers up, saying: This part has to be assembled like this! Now, at times like that, my mind is on the customer." 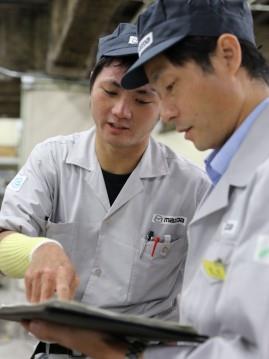 “What expression will customers have on their faces when they see the cars we’ve made here? I’m sure they’ll smile. And what will their expression be after they’ve enjoyed driving the car for quite a while? I want them to be smiling then too. I feel that my job is to ensure that that happens. And when I think about that, I have the customers in mind rather than Mazda. I’m not just saying this. That’s how I truly feel now at the age of 27.”

When the time allotted for our interview was up, Nakamura dashed out of the room and was gone in no time at all. Soon, the first MX-5 RF will roll off the production line. Now you know how the retractable roof of the MX-5 RF was developed, check out the movements of the finished product in this video. 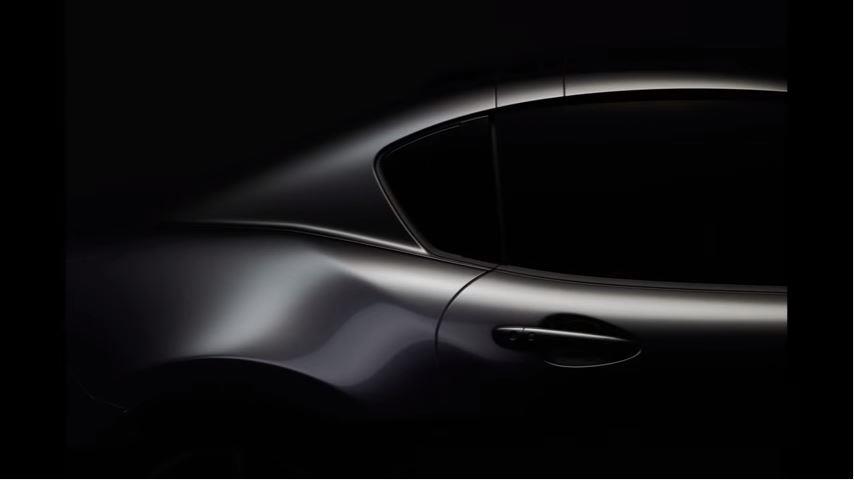