The annual Karuizawa Meeting, one of the biggest gatherings of MX-5 fans in Japan (where the model is called the Mazda Roadster), was held this year on May 29. A total of 2,360 Mazda fans came from all over the country and enjoyed the sunny blue skies and festive atmosphere of the event. We were there and put together this report to bring you a taste of the Karuizawa Meeting 2016. This row of MX-5s was a dazzling sight in the spring sunshine. Shortly after the venue opened, we noticed a long queue forming. We went to investigate the cause of the fuss and soon found the millionth MX-5, surrounded by fans. It’s thanks to fans like these that we’ve been able to produce one million units of this iconic car, a milestone reached in April, 27 years after the model first went on sale.

The millionth MX-5 is now on tour to show appreciation to the fans who have supported the model over the years. The tour kicked off at Hiroshima’s Flower Festival on May 3 before making its way to the Karuizawa Meeting. Fans attending these events have had the opportunity to sign their names on the commemorative model. Many Mazda engineers have also signed this model, often in hard-to-see places such as the inside of the gas cap door. Look carefully and you can even find the autograph of Nobuhiro Yamamoto, program manager for the 4th-generation MX-5. Yamamoto-san signs a minicar for a fan Next we wandered back to the parking lot where people were busy chatting away to friends both new and old. We couldn’t help but notice this bright green MX-5, and as we got closer we saw that the owners were also dressed in green. Naturally, we were curious to find out why.

“This is third year we’ve come, and every year we wear green to match our car. Even when we’re on the other side of the venue, people come up to us and say, ‘We just saw your car in the parking lot!’” Nomura-san and Fujita-san came to the event in a 2nd-generation MX-5 coupe that Nomura-san inherited from her mother.

“I got this car from my mom, and now I just love to go out in it. Lots of people tell me that MX-5 coupes in white are very rare!” she told us excitedly. Fujita-san brought along a red radio-controlled MX-5 he had assembled himself. Doesn’t it look cute perched on the hood of the white coupe? As we sauntered around the car park, people were showing each other their MX-5s, sunbathing in their cars, or even laying out wheels, lamps and other parts for sale. It seems everyone has their own way of enjoying the Karuizawa Meeting. 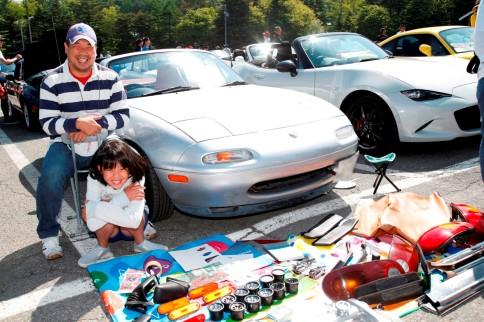 Many we spoke to mentioned that this was the only opportunity each year to meet with other MX-5 fans from all over the country. They were all excited about meeting with a wide variety of people.

The opportunity to meet and talk with over 2,000 people from all over Japan, all of whom are connected by a common interest, is what makes this such a special event. There were many makeshift stalls selling car parts and books about Mazda, but there was something different about this one, which was full of colorful MX-5 models.

Each of these MX-5 models, which faithfully reproduce the original right down to the smallest details, have been carefully made by hand. Momo Craft’s Tamago Roadster Club started making these models in 2000. Currently, the Karuizawa Meeting is the place you buy them. High-quality and only 7 cm long, the detailed reproduction of the interior is incredible.

The climax of the event occurred just after 11 o’clock. We wondered what all those people were doing at the tent, holding their cameras ready. But we didn’t have to wonder long. As the covers came off the all-new MX-5 RF, retractable hardtop version of the 4th-generation MX-5, there was a cheer from the crowd and a clatter of camera shutters. This model was first unveiled at the New York Motor Show in March, but we brought it back to Japan to show at this event as a way of saying thank you to the fans who have been such a big part of the MX-5’s success.

Many people had great things to say about the MX-5 RF, noting that the roof opens and closes in a smooth and beautifully choreographed sequence of movements and that the new Machine Gray body color is especially impressive in the flesh. As usual, this year’s Karuizawa Meeting was full of fun activities, such as a children’s pedal car race, an auction for vehicle accessories and a talk show presentation with engineers. Before we knew it, it was time to go home. Children rev their engines for the pedal car race. Yamamoto-san with Nakayama-san, chief designer of the all-new MX-5 and MX-5 RF

It was a heartwarming event, and everywhere we went people were smiling and laughing. We were grateful to hear people’s stories and feel their love for the MX-5.

We’d like to say a great big thank you to the people who organized this wonderful event and to the fans who came from all over the country. We really appreciate your love for the MX-5! The millionth MX-5 is going on a world tour as a way of saying thank you to fans and owners everywhere. Next stop is the Goodwood Festival of Speed in England.