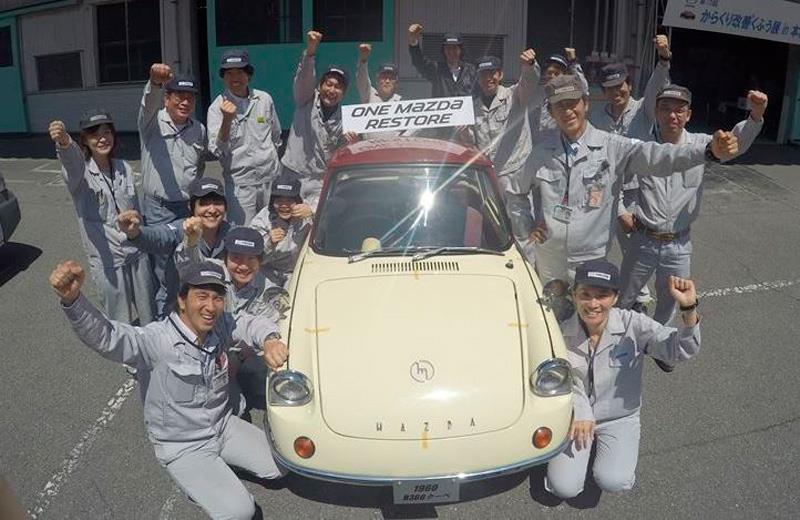 They divided into five groups. The first group was in charge of restoring the gear shifter. They took it apart, cleaned it thoroughly, then based on what they saw of its structure wrote up a maintenance report. Thanks to the students’ clear and concise document, the project staff were able to reconstruct the shifter at a later date. The second group set about lapping the engine valve, a key process in maintaining its performance. The students conducted the work with great care, checking the air-tight seal. 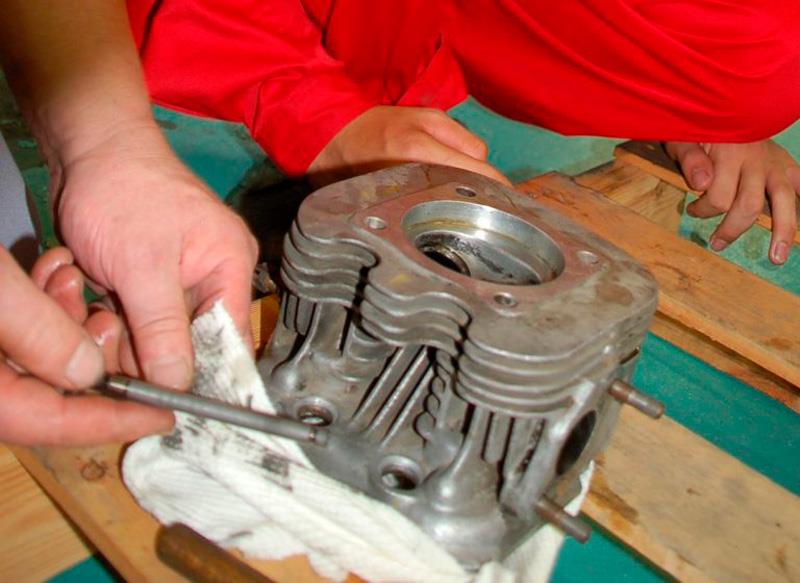 The task of polishing the painted surfaces fell to the third group. As the car had been stored indoors its exterior was in relatively good condition, so the team only needed to apply polish. However, on areas such as the engine compartment and the boot that had collected a lot of dirt, they used a brush to give them a thorough clean. The students were able to notice that surfaces that are usually not visible had become bumpy and required extra attention. 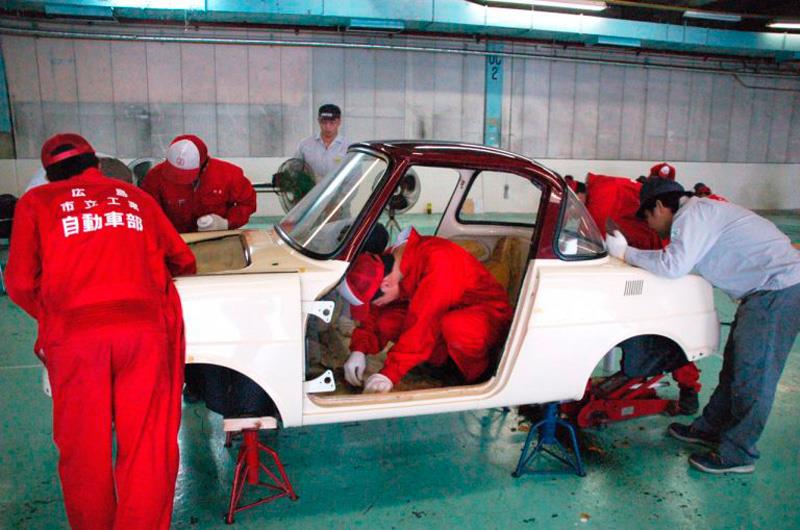 Finally, the fifth group cleaned the transmission and gear parts. The students learned that in the past, transmissions had the same gear whether they were MT or AT. They had a go at manipulating the internal structure by hand so that they could see the gear changes at work. ‘Learning about the history and seeing the actual workplace made me realise that to be a professional I have to start by changing my mindset,’ says Koshiro Motomichi, one of the students from Hiroshima Prefectural Hiroshima Technical High School. ‘It was a great opportunity to learn how professionals think and how they set their goals.’

Thinking about the future

On the previous day, the students were invited to attend a lecture about the history of car manufacturing and the restoration process, and to tour the plant and the museum. The lecture introduced the ‘Mazda DNA’ that runs through Mazda cars through generations, while the tour involved a comparison between a replica of the Fuchu plant, from which Mazda’s factory production began, and the current Ujina plant, so that the students could see how car production developed. They were particularly surprised to learn when they visited the body assembly line that several models are put together on the same line as part of the ‘mixed production system’. 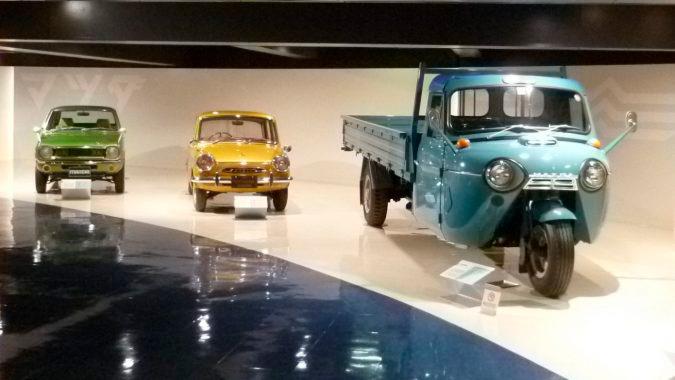 ‘Before this I didn’t know what actually went on at a plant,’ reflects Takumi Nishi from Hiroshima Prefectural Hiroshima Technical High School. ‘Taking part in the tour and witnessing the actual process inspired me to think about my future.’ Thanks to the restoration project, we at Mazda were able to demonstrate to the students the joy and the complexity of making things, as well as the meaning of work and its rewards. We hope to continue these projects so that we can give young people the opportunity to think about their future aspirations.

In the summer of 2016, we at Mazda set out to restore an old R360 together with local Hiroshima high school students as part of our ‘restoration project’, so that we could introduce them to Mazda’s philosophy. And in December, we also invited the suppliers who had helped with the project along with our employees and hosted an in-house open restoration event.

As part of the event, the project members set about restructuring the suspension, rebuilding the door and overhauling the brakes. What particularly caught the visitors’ attention was the R360 Coupe’s suspension, which has a very unusual structure called ‘torsion rubber spring’.

Back when the R360 Coupe was on the market, most roads were unpaved, so car manufacturers had to achieve good fuel consumption and driving experience in an environment where you could feel shocks and vibrations off the ground. The ‘torsion rubber spring’ was a unique piece of technology that veered from the basic structure used by other companies; it kept the vehicle weight down ensuring comfort, and found a balance between car size and a pleasurable ride that complemented the road conditions. Throughout the day, the students from Hiroshima Municipal Technical High School’s automotive club who had participated in the project during the summer watched avidly as the parts they had worked on were put together. The staff showed them how the steering works by actually manipulating the internal structure.

‘We showed them the smaller movements that can’t be brought to life in a display panel, and that helped deepen their understanding of the structure,’ says Uehara, who is in charge of body development. ‘We were able to demonstrate to them the importance of actually looking at things on the ground, something that we also remind ourselves of in our daily work.’ 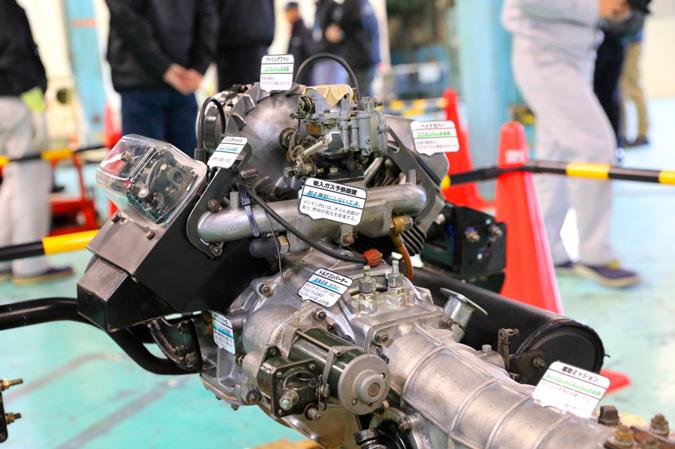 Elsewhere, the suppliers chatted nostalgically about earlier days looking at photographs they had brought along, and praised the restoration project for providing a good opportunity to learn about current technology.

The restorers also talked to project members about the days when the R360 Coupe was first made, and described how plant workers back then would puzzle over what tools were necessary in constructing the vehicle and use trial and error to make daily improvements. Mazda’s CEO Masamichi Kogai also attended and chatted with the suppliers, employees and staff.

Creating cars for customers’ enjoyment: that has been Mazda’s philosophy from the beginning right up to the present, and this event proved a valuable opportunity to relive that Mazda spirit. After the event, the R360 Coupe restoration project carried on with great success, and the car was restored to its original glory.