A Story Behind the Name of “Mazda” 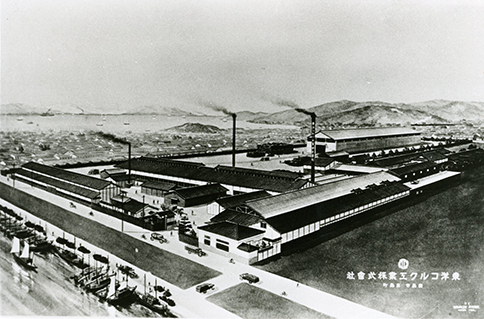 Ever wondered how a Japanese car company that “Celebrates Driving” got its name?

The name “Mazda” was introduced to Japan in October 1931. Mazda started its life as a cork manufacturer back in 1920. The year 1931 was when Mazda, then called the Toyo Kogyo Co., Ltd., launched the “Mazda-go”, a tricycle truck which is a first vehicle coming out of the company. The naming of the tricycle was considered by Jujiro Matsuda, the second president and substantial founder of Toyo Kogyo, and other key members. 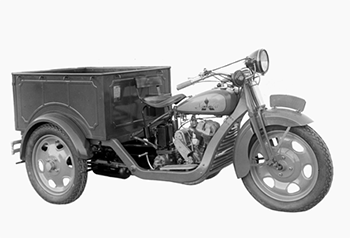 Made by a company that was then managed by a man named Matsuda, the name “Mazda-go” sounds fitting enough. The question is, how come it was spelt “Mazda” instead of “Matsuda”? “Mazda” comes from Ahura Mazda, the god of harmony, intelligence and wisdom from the earliest civilization in West Asia. Key members of Toyo Kogyo interpreted Mazda as a symbol of the beginning of the East and the West civilization, but also a symbol of the automotive civilization and culture. Striving to make a contribution to the world peace and to be a light in the automotive industry, Toyo Kogyo was renamed Mazda Motor Corporation. “Mazda” was also a perfect way to pay respect to the substantial founder, whose family name is pronounced very close to “Mazda”. 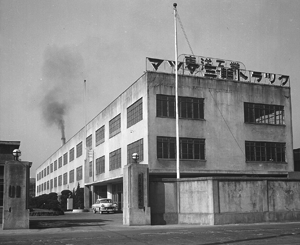 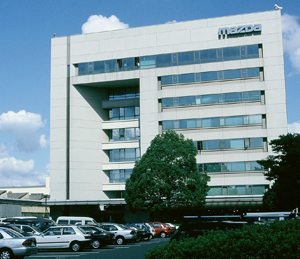 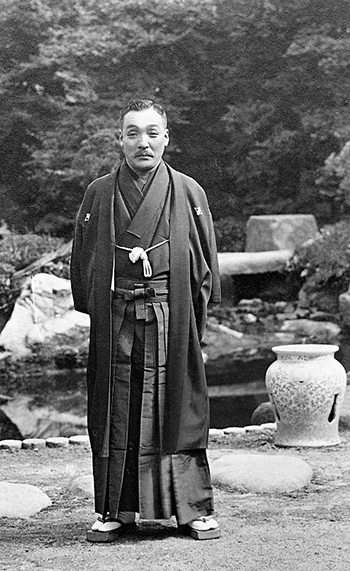 Representing the flow of river of Mazda hometown,
Hiroshima and also form the Latin alphabet letter M,
which is duplicated three times for "Mazda Motor Manufacturer".
The long side extensions represent wings for agility,
speed, and ability to soar to new heights.

Registered in 1951, in the same year when the son of Jujiro, Tsuneji Matsuda took over presidency of Jujiro and became the 3rd president of Mazda.

Started to export the tree-wheel truck to overseas countries in 1949 and along with the expansion of its exports, needed to adopt the logo for overseas countries. This logo was registered first in Taiwan in 1954, and until 1959,
the registration completed for 21 countries worldwide. 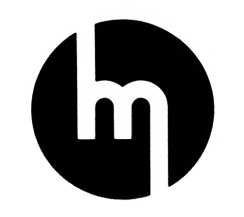 Seen on Mazda R360 coupe or other passenger cars until 1974

This timeless logotype was introduced in 1975 and used until 1997

The brand symbol close to current one was adopted in 1997, with the V-shape wings inside, standing for “growth” and “improvement” and Mazda logo in Mazda blue

Fast forward to the end of the 20th century, the current Mazda brand symbol was adopted in June 1997. The symbol stands for Mazda’s determination to “pursue ongoing improvements to drive powerful, continuous growth”, expressed by a pair of wings shaped like a letter M in an oval. The V-shaped wings are also suggestive of Mazda’s flexible thinking, creativity, vitality, kindness and resilience. Daring to stand up to seemingly impossible challenges, and standing against all odds to pursue its dream. Committed to making cars with excellent quality with a firm belief that new technology can only be developed from overcoming tough challenges, the spirit of Mazda lives on in its brand symbol. 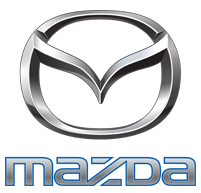 Renewed in 2015, representing the brand which has evolved toward the higher quality and sophistication

Have you ever noticed that if you look at Mazda’s corporate mark, all the letters, except a letter D, are in lower cases? That was because of design – Mazda wanted to express precision and reliability as a car company by aligning top and bottom lines of its corporate mark. A letter D in a lower case protruded the upper line, so the decision was made to use an upper case for a letter D to make the corporate mark neatly fit into a rectangle.

There is a story behind every name, and Mazda is no exception. The name Mazda and its brand symbol tell a story of its long history, burning aspiration and unwavering belief.