JINBA-ITTAI IS THE KEY CONCEPT AT THE HEART OF EVERY MAZDA. WE MEET THE ENGINEERING GURUS WHO PUT THIS UNIQUE PHILOSOPHY INTO PRACTICE ““I spent a lot of time learning from Mushitani-san the basic
theory, mechanics and ways of disciplining the car”

Hiroshi Kawata became a car fan back in his student days when he was impressed by an MX-5 NA that a friend’s father drove, and he ended up joining Mazda. In 2005, the year that the third-generation MX-5 NC went on sale, Kawata was placed in the Chassis Dynamics Development department, joining the team that built the MX-5 NC, the RX-8 and the BT-50 pickup truck.

“I’d requested to join this department simply thinking driving looks fun and cool,” Kawata says. “Of course in reality it wasn’t that simple. But in team meetings, as I listened to my superiors giving update reports on the NC, I began to get a sense of what Jinba-Ittai was.”

The first model Kawata would lead was the BT-50. By coincidence, both Tetsu Kasahara and Yasuyoshi Mushitani had also begun their careers with trucks, and Kawata was able to learn about suspension tuning from Mushitani. After five years building up experience, Kawata was then put in charge of the latest Mazda3.

“It was just around the time that we’d started to incorporate our current basic DNA,” he reflects. “I spent a lot of time learning from Mushitani-san the basic theory, mechanics and ways of disciplining the car, and gradually over three years of handling the Mazda3 I was able to raise my game.”

In 2013 Kawata was put in charge of the fourth-generation MX-5 ND. “I was very worried at the start, but I believed I could do it if I took my experience with trucks and the knowledge I gained from the Mazda3 and let them evolve naturally.” The aim with the ND was to give it the same feeling as the original NA. In fact, Kasahara was also involved with the ND’s chassis development — thereby bringing it back to where it all started. 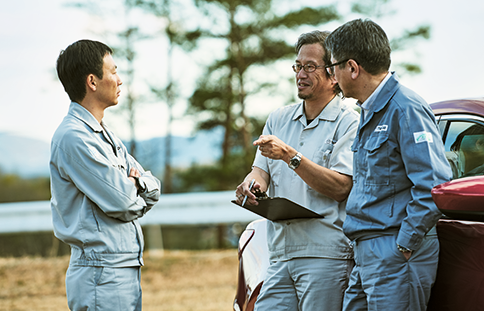 (All three engineers worked on the development of the 2012 Mazda6)

Today, Jinba-Ittai isn’t just about chassis dynamics; it has transformed into a word that encapsulates Mazda’s entire philosophy, including safety and design. Mushitani says: “Human sensations haven’t changed in 25 years. We find the same things beautiful today as back then, and cars that are in sync with our sensations fit like a glove. I’ll take what’s been flowing through from the NA to the ND and ramp it up to a higher definition so that it becomes a universal feature in all future Mazdas.”
Far from being complete, it is now that the Jinba-Ittai story really begins.