We have one goal! To help in local reconstruction!

Following two devastating typhoons that hit Chiba Prefecture in 2019, a group of companies and organizations launched the "BRIDGE CHIBA" Operation Blue Seed as a project to support the reconstruction of affected areas. Chiba Mazda participated in the project as a special partner. The aim of the project was to produce tote bags from recycled blue tarpaulins previously used as emergency roofing in disaster areas in the prefecture and to donate part of the proceeds from sales of the bags as "seeds" for reconstruction.
During the regular holidays of Chiba Mazda dealers in June, after the government's state of emergency declaration to stem the rise in COVID-19 cases was lifted and safety measures were put into place, approximately 70 people including officers, employees and members of their families took part in a work bee where they cleaned and cut blue tarpaulins for around 350 tote bags.
Chiba Mazda then organized its own activities at its 27 stores in the prefecture to distribute the blue sheet tote bags in exchange for donations. The donations collected were then presented to organizations providing assistance to reconstruction support groups. At the end of the project, employees who had participated made comments such as, "I was happy to be able to put the blue sheets to another good use, and make some small contribution to those affected by the disaster," "It was harder than I expected, but with everyone working together, we succeeded," "It was a pleasure to interact and connect with staff of other stores, whom I don't ordinarily see," and "I would like to continue our efforts in the future by exploring ways to contribute to the local community." 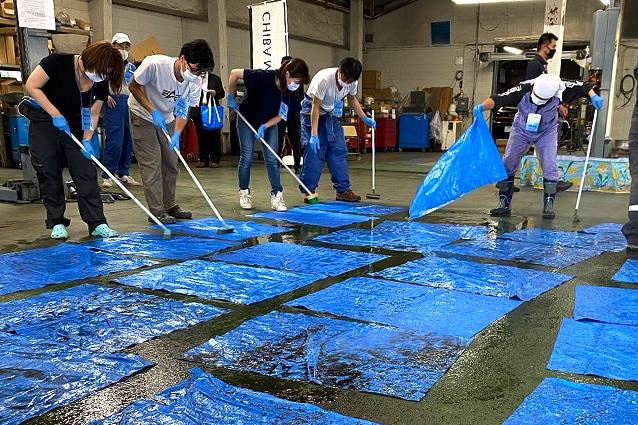 By the numbers
Duration of program: 1 year